When I was in first grade, I wrote a riveting novel called The Magic Cat. It starred me, my two best friends, and my family, and it was a real page-turner. I scribbled in my notebook feverishly every day after school until I decided, finally, I had finished my masterpiece. I was eager to share my brilliant story, and told everyone that I was going to be an author one day. Then, like with most prepubescent career ambitions, I got distracted by another shiny idea.

One night, after staying up late watching Center Stage, I realized that- how obvious!- ballet was my calling. I asked my mother to sign me up for ballet classes stat, so I could get to work honing what must be my god-given talent. Quickly, however,  I discovered I have no rhythm and didn’t really like the look of a leotard. Again, I moved on. Probably a good choice, considering I only grew to be 5’1″ and have been told (multiple times) that I have the gracefulness of a linebacker.

When I got sucked into the Grey’s Anatomy craze in high school, I had already decided that I would follow in my father’s footsteps and become a doctor. I didn’t particularly enjoy science and I freeze up in emergency situations, but I was a good student, I already owned a pair of pink scrubs, and I figured I could make a pretty good living. When my high school sent out a questionnaire about future career plans, I wrote, “Medicine.”

When I got to Vanderbilt in August of 2009, I still hadn’t committed to a major. During dorm orientation, our RA asked, “Who here is planning on going pre-med?” When well over half of the girls in my hall raised their hands, the RA laughed, shook her head, and said, “I can’t wait to ask you guys again at the end of the year.” Apparently only the strong survived the pre-med course load, and since I wasn’t even totally sure medicine was the route for me,  I changed my mind once again.

I brainstormed for a bit, and decided I should just stick to what I enjoyed most in high school: English and journalism. I loved to write and it was the only thing that felt natural and right. My official major became English literature, and I got to spend four years reading, writing papers, and brushing off jokes about being unemployable. “But I’m going to go to law school,” I always responded. “English is the perfect major for that!” At least that’s what I heard, so I decided to go for it.

I purchased an LSAT book and decided to buckle down. I even signed up for the entrance exam and started researching law schools. My mom, an attorney herself, didn’t seem totally enthused about the idea. “You can go if you want,” she told me. “I just don’t think you’d enjoy being a lawyer that much.”

Hmmm, OK then. I did a bit of soul-searching and decided, yeah, I didn’t want to head straight to law school. Instead, I’d pursue a less traditional, much more exciting passion of mine: comedy. I took a job in Chicago and signed up for improvisation and comedy writing courses at The Second City Training Center. And it was so much fun. I got to be completely creative with a bunch of weirdos, and it was the scariest and best experience of my life. While I completely sucked at improvising, I loved writing.

The whole time, of course, I had a traditional 9 to 5 job. First as an editorial assistant at a publishing company, then as an administrative assistant at a taxation company. When I got the writing bug yet again, I started doing small freelancing projects on the side. That’s how it works, after all– you do something to pay the bills during the day, and then cram in your hobbies and passions at night and on the weekends.

So I’m taking one too! I genuinely, whole-heartedly, enthusiastically believe that I had it right the first time, when I was losing track of time creating The Magic Cat. My heart has always led me back to writing, and I’ve always felt most comfortable when I’m being creative. Somewhere along the way, I got the idea that writing itself isn’t a career, only a skill I can utilize at a real, traditional day job. The doubts in my head are just going to have to shut up, because I can make writing my career if I want. 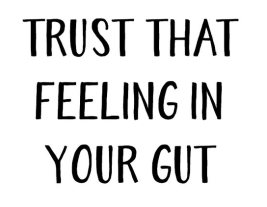 I have to hustle, I have to be OK with rejection, and I have to keep putting myself out there. I’ll have to make sacrifices, and I have to commit myself entirely to making this work. But I’m going to, because I believe that life is way too short to save your passions for the evenings and weekends. I want to choose my life, rather than settle for one, just to ask “But what if…?” decades down the road.

So, basically, what I’m trying to say is: Keep your eyes peeled for The Magic Cat: Part II.