Posted May 15, 2017 2 Comments by CarolineHogeveen

I’ve wanted to write this blog for a long time. A really, really long time. I’ve been putting it off for a couple of reasons. First, there aren’t words that can do this man justice. I want to honor him properly, and I know I’m not a talented enough writer to do that. Second, I don’t even know what to say. Truthfully, I struggle with a lot shame that I wasn’t the best friend I could’ve or should’ve been, and when I write about my relationship with Justin I know I can’t sugarcoat that emotion. Regardless, I decided it’s time that I at least try to write about this guy. After all, his friendship and his death altered the course of my life, and it seems insane that I haven’t touched on it yet.

Since I’m at a loss for how to organize my thoughts, I guess I’ll just write chronologically. Justin and I both grew up in Zionsville, Indiana, and I don’t remember when we met. We were both in advanced classes and he was one of those guys that I just always knew. He was nice to me, and I was always happy when seating charts put us close to each other, but we were never more than classmates.

In high school, Justin and I became a lot friendlier. One of the first distinct memories I have with him is running to his house because he claimed he had some “leaked” Harry Potter chapters from the newest book that was about to be released. Clearly, we were both huge nerds. He lived a couple of houses down from me, and I remember thinking that we really should be friends, since it would be so convenient.

Justin and I had English together during our senior year of high school, and he sat right in front of me. One day, he spun around in his chair and announced that he was going to apply to Vanderbilt early decision. I was not happy. I knew Justin wanted to apply to my dream school, and I was excited that we might be classmates yet again. However, applying early decision was MY plan! If Vanderbilt had a quota for how many students they’d take E.D., there’s no way they would take TWO kids from Zionsville Community High School! Justin was a math and science whiz, and I was horrified that he was going to steal my Vandy dream.

On the day that early decision letters were being mailed out, Justin and I were freaking out. We joked that we were going to camp out in our cul-de-sac and attack the mailman when he arrived. Our English class was the last period of the day, and Justin’s best friend popped into the library and handed Justin his envelope from Vandy. He was going to find out his decision before I did! He tore open his envelope and yelled, “I got in!” Our English class burst into applause, and my head almost burst into flames. If I drove home to find a rejection letter waiting for me, I was going to smack this kid.

Fortunately, I ended up getting into Vanderbilt too, and didn’t have to plot my revenge on Justin. Two months after we got our acceptance letters, my dad died. When I left for Vanderbilt six months after that, I was very much still grieving. Having Justin on campus, a friendly face from my little hometown, was more comforting than I can explain. We quickly went from friendly classmates to close friends.

Over the course of four years at Vanderbilt, Justin and I became best friends. We were in polar opposite majors and different social circles, and I was so thankful for that. When I needed to pass introductory chem and introductory physics, Justin did the impossible and tutored me to an A. When I fought with my roommates or got fed up with sorority politics, Justin was my escape – after all, he didn’t care about that stuff. Whether it was his shoebox Kissam dorm or Village at Vanderbilt apartment, he always had room for me. We watched 30 Rock, ordered Chinese food, and talked about life. I adored his musical talents, and he played guitar and piano for me (even when I sang along and ruined it). I can’t even tell you how many times I cried about missing my dad to Justin, and he did his best to comfort me. We spent hours upon hours doing nothing together, and it was everything.

If you’re thinking to yourself, “Wow Caroline… that kinda sounds like a selfish friendship,” … you’re completely right. I was often a complete mess in college, and Justin was always there to pick up the pieces. He was truly the kind of friend that you find once in a lifetime. He was a typical college guy in the sense that he always had a million things on his plate, yet he was always there for me when I needed him. He loved me unconditionally, and I can count on one hand the people I can say that about. He was my home away from home and easily the most loyal friend I had at Vanderbilt. I hope he knew that. 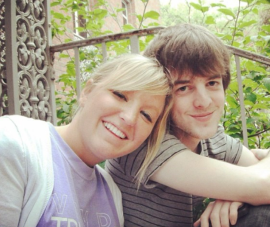 During the first year out of college, Justin and I Skyped as much as we could and kept up with each other through lots and LOTS of texting. Before my first improv show at Second City, Justin FaceTimed me and played “Pompeii” by Bastille to pump me up and help me get rid of my nerves. It was one of the most thoughtful things anyone has done for me – not only did he remember my little weeknight student show, he perfectly timed the FaceTime to when he knew I would be getting ready and at peak nervousness. At the time, I wasn’t even surprised. That was the kind of friend Justin was, after all.

When Justin died in May of 2014, I hit my personal rock bottom. I haven’t talked about it much, but his death is the reason my mom held the intervention (and, ultimately, the reason I’m sober now). The overwhelming emotion I felt was anger. My stories about Justin’s generosity and unwavering kindness are not unique – he was a loving son, brother, and boyfriend too. He treated everyone with a thoughtfulness that you just don’t find often. It made no sense that someone like Justin could die, while someone like me – self-centered and lost – could be healthy and safe. I couldn’t understand how his parents, who are truly two of the gentlest and sweetest people I’ve ever met, could lose their son. I couldn’t comprehend that his long-term girlfriend would be planning his funeral instead of a wedding.

This is where I get stuck. I have no idea how to end this blog post. I could fill 100 pages with memories of Justin, but nothing will ever seem like enough. My biggest hope in my life is that he knew how much I treasured our relationship, even when I didn’t adequately show him. I hope he knows that his friendship meant more to me than anything, and now that I am healthy and whole, I try to emulate him in my current relationships. I hope he knows how much he meant to everyone he encountered.

Finally, I hope he knows the impact that his legacy is having. Justin was an organ donor, and his parents, Janice and Bryan, are continuing this mission. Additionally, they started the Justin David Langford Memorial Fund and Vanderbilt Scholarship Fund that “ensures a perpetual scholarship to encourage students to serve society and improve lives through the pursuit of careers in a STEM (Science, Technology, Engineering, and Mathematics) related discipline.” This Saturday, May 20th, the second annual Run4Hope will be taking place in Whitestown, Indiana to inspire hope, honor Justin’s memory, and raise proceeds for these scholarships. If you’re in the area, I really hope you’ll join us. If you’re not in the area, I encourage you to donate to this incredible cause.

Tell your friends how much you love them. Tell them how grateful you are for what they do. Show up for them. Don’t take more from them than you give back. Finally, as cliché as it sounds, don’t assume you’ll have another chance to tell them how wonderful they are. I love YOU, guys!